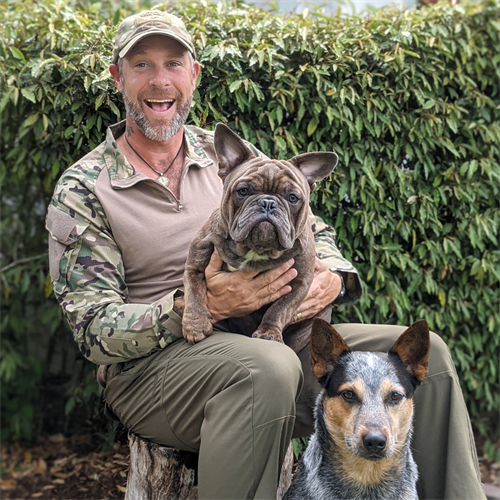 Event Description:
The traveling exhibition The Art of War, 18 pastel paintings by Sgt. Phillip Scott Moore are now on display in the Military Heritage Museum’s Hall of Heroes gallery through June 30, 2022.  The Museum is open Tuesday through Saturday from 10am to 4pm.

Sgt. Phillip Scott Moore joined the Army at age 21. After serving in the 1st Cavalry Division, he was able to endure three combat deployments to Iraq from 2004-2010. Suffering from PTSD, he sought out help through “Prolonged Exposure” from an Illinois VA doctor, Joanne King.

Although Phillip did not realize he was colorblind until he enlisted in the Army, he learned to use his color blindness in his art. His vision physically shakes looking at certain colors next to each other; this is called “Color Vibration”.

In 2014, he moved to North Port, where he met and married his wife, Michele Moore, and became a member of the North Port Art Center. They both quit smoking in 2020 and began attending an evening soft pastel class together as a “Date Night”. This was a catalyst for him to express positive feelings and externalize difficult emotions through his art.

From charitable contributions to becoming a locally know artist, Phillip volunteers at the North Port Art Center. He is truly embracing his mental trauma through vocational rehabilitation and has shown that art and community heals in so many ways.
In addition to overcoming his PTSD, he is courageous enough to paint what he sees, not what he thinks everyone else sees.  Rendered through soft pastel from some of his own military photos, “The Art of War” is an 18-piece exhibit of images through the colorblind eyes of this eclectic war veteran. Sgt. Phillip Scott Moore shares his story with us about his time overseas through his photos and his paintings.  Moments in time that were captured are explained through subtle wording and relentless color schemes. The ultimate story of the healing power of art. Phillip hopes to inspire other veterans to seek for their joy and happiness.
Date/Time Information:
The Museum is open from Tuesday through Saturday, 10am to 4pm
Contact Information:
Gary P. Butler
Send an Email
Fees/Admission:
Included in admission price to the Museum
Set a Reminder:
Business Directory Events Calendar Hot Deals MarketSpace Job Postings Contact Us Information & Brochures Weather Join The Chamber